A downloadable game for Windows

The best way to tell you about this game is to tell you how we came up with the idea. Everyone at Repulse loves anime. Especially fantasy stuff like Full Metal Alchemist, Attack on Titan & Berserk.

We have been making VR games for 3 years now. When we finished our last project ( which is also on itch.io ) the question came up. What if, we could bring what we love most about fantasy anime to a full interactive VR experience.

We didn't want to do just a story that you can watch. Or just the sex, or just a battle system. We want everything: A story, To participate in the battles, To fly through skies using a grappling hook, To explore an anime world, choices, and to do whatever we feel like with sexy anime girls.

All of this in full VR, and of course with the option to play without VR.

We are putting together some of the pieces. We have an early pre-alpha that you can test out. We update it every 2 weeks and also provide changelogs, and videos explaining the changes. Right now we are looking for early testers that can help us make this game better. If you are interested in becoming a tester, or following our progress on this.

Check out our Kickstarter and make sure to click the “Notify me on launch” button so you get notified when we launch our campaign. https://www.kickstarter.com/projects/repulse/1652445991?ref=807824&token=bef96926

Honestly, game has potential. Played the free version (skeleton base version) you have here.

I do like the unlocks in the gallery for characters. Maybe the Gallery thumbnails could be blurred at first. Some quests tied to them (gotta work hard for the titties but not too hard) lol, But some people aren't comfortable with sexuality apparently.

Anyways, keep up the work!

p.s. Many will criticize but an artist will always be his own worst critic. In the end, what may seem to have perished will turn into beauty.

Thank you so much for the awesome feedback! Glad you enjoyed it and managed to see some potential. We are working hard on it everyday and more updates are coming soon! Feel free to stay tuned on our Discord, cause that is where we post updates first. https://discord.gg/QanymSf

Is there going to be a censored version. So like still LEWD but not straight up rule 34? I can see this game having a lot of potential, but once I entered the camp and went to the gallery of Paige, and saw the first gallery, it made me very uncomfortable and I uninstalled it.

boobs do me a scare

Hello, Yes we are considering to make a censored safe version, depending on how well the game goes. :) So sorry that you felt uncomfortable.

Okay! Thank you! I'm okay with things being LEWD but if it's straight rule 34 (Pornography) Then that's when I start getting uncomfortable. Thank you for responding!

Sorry, unfortunately this is a PC only game. :)

This looks pretty good, any chance for a Female MC one day?

Thank you! We haven't discussed having a female MC, but depending on how the development of the game goes, we are open to anything. What did you like the most? :)

For some reason there is no sound in Oculus Rift S. The sound comes from the sound card of the computer and it does not change anywhere in the settings. How can this be fixed? The problem is only with this game.

I am sorry to hear about your issue. Unfortunately we don't have the Rift S, so we haven't tested on it therefore we haven't ran into this issue, so at this point we don't have an idea on how to fix this. Maybe try changing around the different sound input devices you have. A wrong device selected can sometimes be the issue. Let us know how it goes.

Is there any nudity in this came yet?

Asking for a friend.

Haha, for now there is no nudity. But we are currently working on a build that will include some and we are planning to release it in the next few weeks. First place to get it will be our Discord :)

Hmm, this is weird. Try downloading it again.

hi,I fixed the problem, I only have to extract the rar file with an app for rar file

Glad to hear that! Is everything working properly now?

yep, all is good.

is there nudity in this game?

Currently no, but it will be implemented.

Very promising!!! I loved it :D

couldn't you separate the VR version and the Non-VR version in separated downloads for the following updates? It would be better for those who will only play one of the versions, don't needing to download all the stuff :P (4GB last too long for me xD)

Thank you very much! Glad you enjoyed it!

We were having a hard time figuring out how to upload 2 separate files, but we will look into it again, cause it is possible and next build will be separated. Sorry for the inconvenience! :D

Which version did you try? What did you like the most?

I think what I liked the most was hooking trees and fighting that ninja. I filled out a form after finish playing =D

Thank you. Feedback is very useful to us.

Rather interesting so far but could use a few touch ups in some areas. Seems like it has some controller support but I couldn't perform certain actions such as using the camp, might want to either improve controller support or remove it. Grappling was fun but I did find myself falling to my death a few times when I'd grapple something that left the line too long to get close enough to another grapple point, I'd suggest adding a way to move up and down the line to prevent this similar to the clawshot in Twilight Princess or maybe have set line lengths. Also some information about combat would be nice since I was never given any info on it when I encountered my first enemies, I only managed to survive because I had stumbled upon the equip wheel and figured combat out on my own before that point. I also think spells could use a bit of a splash zone since the lighting spell didn't seem to hurt unless I directly hit the enemy regardless of the signs that they were in the blast zone on the ground (didn't really test the fire or frost spells so not sure how they work). Dialog was also a little quiet in the cabin scene even when I raised my volume and since the scene didn't have subtitles I almost couldn't hear what they were saying. After all that I still had fun swinging around and raining lightning down on my enemies and am interested in seeing more.

Thank you for your suggestions. The game is still in pretty early stages so there are a lot more features to come and a lot of issues to fix, some of which you've mentioned here.

Does it need some software to run the game? I have opened it several times but it leave me with a loading pointer mouse and just like that. I have tried to open the game folder and edit the config for the game, like resolution, graphics etc; but still give me nothing. It is a nice idea for the game tho and myself too an Anime fan, so it would be great to be able to Play this game.

Or does it need a good computer's requirements to play the game? Like 8 gb Ram or Intel i7 or sort ... don't know though unless there's some explanation  on details about that -_-

And if it support a low PC's spec to run that would be GREAT, and mind is one of them, maybe. And yeah My PC's specs are:

Hi, sorry to hear you're having problems. This is strange indeed. If you're starting up the VR build it won't work if you don't have Steam. If you are starting up the non-VR version then the problem is most likely in your graphics card.

Thanks for the reply. I am starting up the non-VR version indeed and yeah just as I thought the problem's on my graphics card and well ... yeah what I can do now is just to wait till I got a new Proper Laptop or PC while following the development of the game.

And it's a nice game tho!

I haven't been able to try the game out because every time I try to open the game,  it takes me to website and I cant get my steamvr out of monitor mode so it screws everything up for my headset until I turn it off, try it again, rinse and repeat. I've tried 6 times and have had no luck. so itd be a help to fix that because im really interested in what this game has.

The tagline is offensive! Well done Repulse =...( But

I think it should be "Slay Bitches & Lay Witches" .. I mean come on.

Wow this was cooler than I was expecting, really liked the grappling mechanic - though it could be more clear when you first get the ability that only certain surfaces can be grappled to

The text following your gaze felt a little strange, also because it was a little too wide for the FOV of my Oculus Rift CV1.

It was cool that there was a story developing between me and the other character, obv. voice acting and microphone quality / processing of the audio file to remove noise and try to equalize volume and reverb across actors/clips could be improved. I'm sure it's just placeholder though.

I liked that the caster enemy dodged, made things feel a little more interesting. I don't like the bullet hell style VR games where it literally becomes stressful trying to defeat waves of enemies so it would be cool to have slightly challenging combat but to avoid that stressful style of fighting.

Most excited to see the story and dialogue in this game more than anything.

Is there a menu that is accessible? Ive hit pretty much every button but cant access anything to save, or quit the game without doing ALT F4

Is there an issue with the models? the model that shows up while playing is female, but the voice is male, and in cutscenes the character appears to be male

Include a way to reel in the grappling hook. It can sometimes put out too much line, leaving you hanging below the islands with no way to get back up except to fall, and start over

Thanks for your feedback!  We are still in Pre-Alpha stage and trying to work out a few core things along with the issues you mentioned.

The menu and save system won't be ready for a few more weeks.   Right now we are still trying to work out a menu with spells, weapons, items, and a gallery of unlocked scenes.

We hope to eventually give the player the option to be either male or female but the final player models are still not decided.

We are trying to come up with a solution to reel the player up, right now the only way to do it is to let go and then grapple again which automatically pulls you up but is not very intuitive.

We post updated builds and update videos regularly,  hopefully the issues you pointed out will be resolved soon. 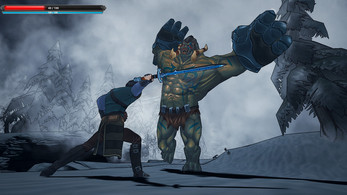 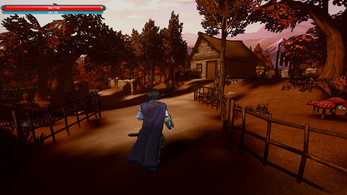 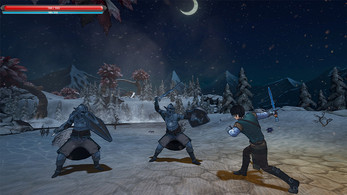 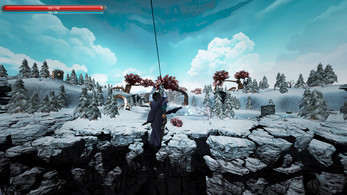